Blizzard started to teasing Hero 32 from its official Twitter account. It's likely possible a support hero but we still need a bit more information.


Blizzard, the developer company behind Overwatch, shared a post recently on the game's Twitter account. This post possibly pointing to the new hero of the game. So, who will be the Hero 32 of Overwatch? The shared image contained a page taken from the personal diary of Dr. Mina Liao, one of the 6 founding members of Overwatch.

In the diary, Dr. Liao says he is working on a project to show that Omnics are as alive as humans. Dr. Liao also states that Jack (Soldier: 76) has agreed to approve his project as the Omnic Crisis is about to take place and violence against Omnics is increasing worldwide. 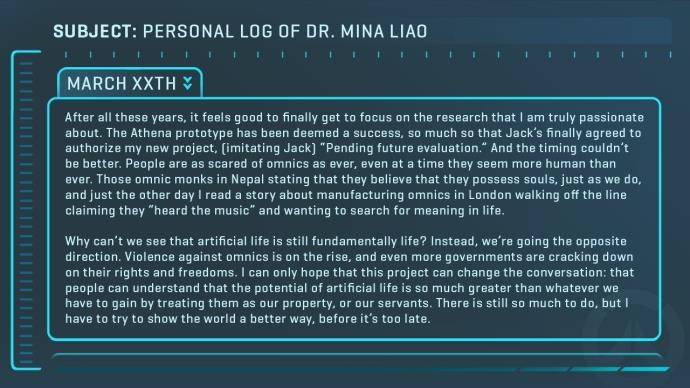 Athena or Echo? Or someone else?

As the fans of the game will know, Mina Liao; one of the 6 founding members of Overwatch, along with Jack Morrison, Gabriel Reyes, Main Amari, Reinhardt Wilhelm and Torbjörn Lindholm. In the personal journal published recent days, the latest project Athena prototype is mentioned. Athena, a computer system that frequently helps Winston in his tests, is an artificial intelligence that players actually encounter in the game.

Overwatch lead writer Michael Chu, who recently left the company, said in a statement earlier this year. He said that Liao is definitely an important character and will bring more to the game. This initial sharing for Hero 32 may have been made to raise expectations about upcoming innovations.

Another possibility is that the next hero is Echo, which was last seen in his Overwatch 2 cinematic trailer. Many players think that Echo is somehow connected to Athena because both characters are artificial intelligence. At this point, we have to wait a little longer to see who the 'Athena prototype' is.