The gaming industry is closing this year with record growth, powered by the COVID-19 pandemic. According to the latest published figures, the total revenue of this year has reached 180 billion dollars.


The gaming industry is preparing to close this year with an incredible growth. According to new data released by IDC, the industry's total revenue worldwide will reach nearly $ 180 billion this year. The COVID-19 pandemic is cited as the biggest reason for this tremendous 20% growth in the industry.

The biggest growth in the video game industry in 2020 was seen in mobile gaming. With a full 24% growth over the previous year, mobile gaming is expected to close this year at $ 87.7 billion (excluding in-game ads). Despite the new generation consoles, mobile gaming continued to be the leader in both growth rate and total revenue.

On the console side, the total revenue increased by 20% compared to the previous year, reaching $ 52.5 billion. This figure includes all hardware and software sales. On the hardware side, a significant leap was observed, especially with the release of the new generation consoles last November. 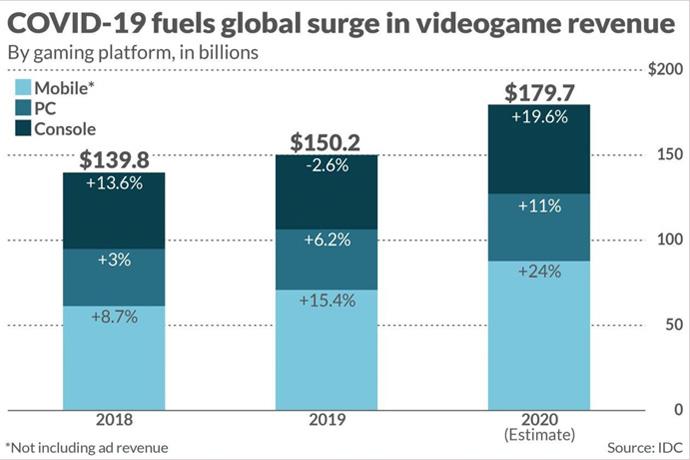 PC gaming continues to follow mobile and console gaming from behind. With a growth of 11%, total revenue reached 39.5 billion dollars. Lewis Ward, game research manager at IDC, said the growth on the PC side remained slightly smaller due to Chinese internet cafes that were closed for a long time due to the pandemic.

Larger than the film and sports industry combined

When we compare these incredible figures in the gaming industry with the film and sports sectors, a very interesting picture emerges. The film industry had closed 2019 with nearly $ 100 billion in revenue. On the sports side, the total revenue was 75 billion dollars. The video game industry thus managed to outpace the total of 2019 revenues of the two sectors. However, it should be added that the film and sports sectors are expected to shrink this year due to the pandemic.

It is estimated that the game industry will maintain its growth rate in 2021. After the pandemic, the growth rate will probably decrease. Ward said that they expect a slowdown in the gaming industry like 2022, with the spread of COVID-19 vaccines across the world and normalization.