The start line is here and the lights are green for R8 Games’ high-octane anti-gravity combat racing game PACER on the Xbox One family of devices. PACER is already available on PlayStation®4 computer entertainment system and PS4 PRO and PC via STEAM.

PACER is an explosive anti-gravity combat racing game where players can race in a variety of single player modes or with up to 10 players via online multiplayer.

PACER is fully optimized for online and competitive gaming with 10 player multiplayer, online ranked mode to see how you compete against the best in the world and online tournament/spectator mode for easy streaming and fun events at all levels. 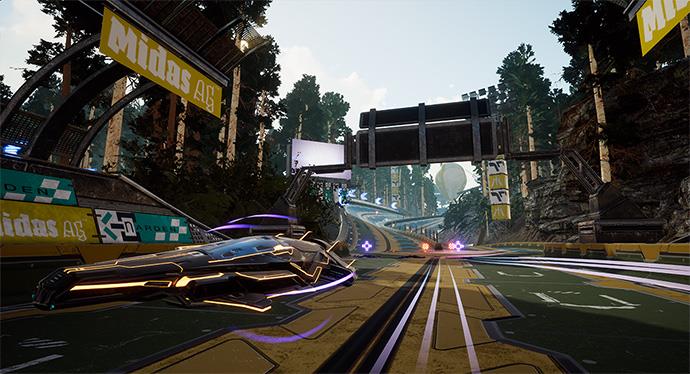 Featuring music from the original anti-gravity racing composer Tim Wright aka CoLD SToRAGE alongside an incredible line-up including; MethLab, Ed Harrison, DubFX and a selection of artists from one of the most creative independent record labels in the world, Warp Records. In total there are more than 80 tracks from 45 artists featured in the game.

PACER is part of the Xsolla Funding Club, a matchmaking service connecting video game developers with investors at no cost. The game will also be integrating multiple Xsolla products from In-Game Store and Player Inventory to Partner Network and Site Builder, to help market and launch the game across all platforms.

Formed in 2014, R8 Games is an independent game development studio based in the North East of England. Their current focus is creating titles for both PC and consoles. The team features a wealth of established talent who between them have worked on franchises such as Borderlands, Crackdown 3, Mass Effect, Wipeout, Motorstorm, Lego Batman, The Escapists 2, Lord of the Rings, Star Wars and the Incredible Hulk.

Xsolla is the video game business engine with a set of tools and services that helps clients operate and sell more games globally. Serving only the video game industry, the Xsolla product suite caters to businesses from indie to enterprise, with: Xsolla Pay Station and its #1 Anti-fraud solution, Xsolla Partner Network, Xsolla Site Builder, Xsolla Store, Xsolla Login, and Xsolla Launcher. These tools work seamlessly to solve the complexities of distribution, marketing, and monetization so developers, publishers, and platform partners can increase their audience, sales and revenue. Headquartered in Los Angeles, with offices worldwide, Xsolla operates as a merchant and seller of record for major gaming entities like Valve, Twitch, Ubisoft, Epic Games, and PUBG Corporation.