Targem Games and Gaijin Entertainment announce the release of the “Syndicate” Content Update for the post apocalyptic online action Crossout. A completely new faction called the Syndicate has arrived in the wastelands, so the players are getting new tasks, new car parts and a new PvP map “East quarter”. The Syndicate event will be available until April, 30th.

Right before the apocalypse the Syndicate leadership worked in a branch of the Pan-Asian corporation “Neon Dragon” that specializes in implants and  prosthesis production as well as AI technologies. Nowadays the Syndicate is a closed society оrganised in a strict hierarchy, its members using augmentations, smart weapons and advanced energy storage devices. In order to get access to the Syndicate tech, players complete faction tasks from the new season of the Battle Pass.

Those new car parts bring new interesting gameplay features. For example, the epic cabin “Jannabi” accumulates the energy that is generated while the armoured vehicle is drifting. It directs the excess energy into the weapon, seriously increasing its damage. The legendary “Yokozuna'' cabin launches a support drone that increases the power of allied vehicles. The contact weapon “Tempura” burns right through the enemy’s vehicle parts, the autonomous drone “Yaoguai” rains fire on a huge part of the map, and “Enlightenment” tracking system cancels all enemy efforts of evading battle. Finally the new rolling-based chassis “Omni” allows players to build vehicles capable of moving any direction. 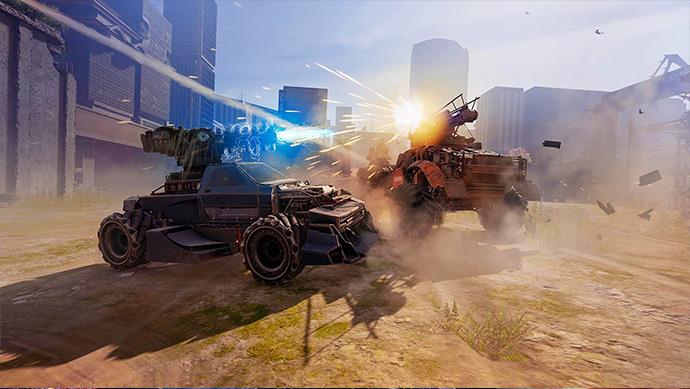 The “East quarter” is the first Syndicate-styled map in Crossout. The new faction has founded a base in the megapolis slums, restored electric power and installed neon signs and information screens on the high-rise buildings. The center of the location is crossed by a dried channel. Fast melee cars can descend there to catch their opponents by surprise and cause panic in the ranks.

The full description of the Syndicate event, new armoured vehicle parts and other changes in the game is available at the official Crossout website: https://crossout.net